The Story Behind Feature-Driven Development 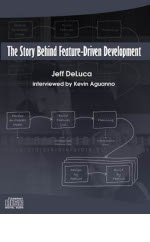 Feature-Driven Development is one of six recognized major agile development methodologies. FDD and Jeff De Luca are a part of the Agile Software Consortium, and FDD was one of the original agile methodologies represented at the signing of the Agile Manifesto. While most recent writing about agile has concerned Scrum and Extreme Programming (XP), there are still a sizable number of people succeeding in agile software development using the FDD method.

In this 60-minute interview with Jeff De Luca, the co-creator of the FDD method, he tells us about the story behind the development of the FDD approach: how it was conceived, its early evolution, and how it was introduced to development teams and organizations.